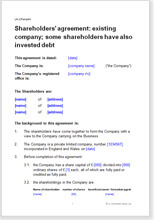 A comprehensive shareholders agreement for an existing company that also has debt financing from a big lender such as a business angel or venture capitalist. Use this agreement to protect the rights of each shareholder against each other and the debt provider and also for setting down the strategic management of the company. This agreement could be put in place perhaps on the introduction of new shareholders or directors, a new financing round, or after restructuring, or simply to redress the balance of shareholder power as the company grows. It is suitable for companies where all or some shareholders are also directors, or where there is a mix of active and inactive owners.
About
Preview
Why from us
Ask a question

About this shareholders’ agreement

There are two essential reasons for having a shareholders’ agreement:

Disputes between shareholders and other stakeholders are expensive and can be disruptive and detrimental to the on-going operation of the business. Having a clear agreement in place reduces the likelihood of disputes and makes resolving any that do occur easier. A clear and comprehensive agreement also reduces the need for subjective decision making by an arbiter or judge that can give shareholders, and particularly minority ones, so much uncertainty and worry.

Two versions of the Net Lawman shareholders’ agreement (this is one) cover the situation where the motivation to enter into a new shareholders’ agreement or improve an existing one, is the appearance of a new lender. There are many ways a loan agreement can be structured. The most common is for the lender to take some shares, either by new issue or maybe an option. The larger part of the money introduced is then provided as a loan, secured against the assets of the company, or by personal guarantees of shareholder-directors. So far as the lender takes shares, he will want to safeguard his position as a (probable) minority shareholder so as to give him de facto control of the company if it fails to deliver on the promise of success. To achieve that requires small changes to the situation, for example, where a company is run by directors who are all shareholders. The new lender may want board representation, but more commonly, he will wish to stay apart from management, so that he cannot be blamed should the company fail to prosper.

The law in this shareholders’ agreement

This document is written in plain English by a former English solicitor who specialises in commercial drafting and who has practical experience of resolving shareholder disputes. As a former director of numerous private and publicly listed companies, he includes practical, “real world” considerations. The agreement is up-to-date and very comprehensive.

When to use this shareholders’ agreement

This agreement is suitable for any private company, no matter what its business. It is about rights, power, control and safeguards, not about your business.

A company’s shareholders agreement can be redrawn at any time, but is commonly done when the relationship between the shareholders and the directors changes, perhaps as a result of one or more of the following:

However, the best time to put an agreement in place is “now”. Clarity on how decisions are made will let you sleep better at night, whether you hold a small proportion or a large majority of the shares.

All the shareholders must sign the shareholders agreement but there are no rules about which of them must manage the process of taking the agreement through to signatures. Any shareholder could suggest that the document is necessary and could start the discussions.

No other shareholders’ agreements for sale on the Internet are in plain English or are so comprehensive in their cover of legal issues and the drafting explanations and tips supplied. Net Lawman’s slogan “Real law, in plain English” is as true of this document as of any others.

In many areas, we give you complete alternative paragraphs and explain in the notes when each will be the most suitable for you.

This document contains over twenty commercial paragraphs as well as what you might call technical legal provisions. You can choose which are suitable for your needs. Many are based on our practical experience as solicitors of dealing with shareholder disputes.

Examples of these provisions are:

Other versions of this shareholders agreement

We have six versions of this shareholders agreement with only small differences, making choice easy. All are designed for a private company in any business with any number of shareholders, some of whom will be directors. All assume that some shareholders will work in the company, but that is not essential.

This one is for an existing company. Other versions are for new companies and for companies where there has been no debt investment.

What Our Clients Say