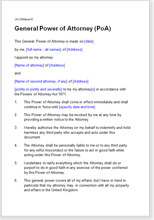 Use this general power of attorney to delegate authority to someone else to act on your behalf, usually for a short and specified period of time. You may be abroad but need someone to look after your financial and legal affairs at home for you (such as buying or selling property), or you may need someone to help with a specific task (such as collecting a pension) or you may just prefer someone more expert in a certain subject area (such as law) to act on your behalf in a certain matter.
About
Preview
Why from us
Ask a question
Customer reviews

About this general power of attorney template

This general power of attorney template (also called an ordinary power of attorney and sometimes referred to as a PoA) allows you to give temporary authority to someone else to make decisions and act on your behalf.

As the giver you become the “donor” of the power and the receiver becomes your “attorney”. The actions that your attorney may take on your behalf can be as general or specific as you like and may relate to one part or all of your affairs.

The general power of attorney document specifies both the powers that you grant and the time period during which the attorney has those powers.

One of the features of a general power of attorney is that it created for a defined period of time. It is not indefinite. It becomes effective as soon as it is signed (or otherwise if you specify in the document). You could draft it now for use later.

If you need to cancel it (called revoking in legal jargon) before the expiry date in the document, you can use a document called a deed of revocation to do so. It will automatically be revoked if the donor loses mental capacity.

With this template, you have complete flexibility as to who to nominate as your attorney, the powers that you delegate and how they should be used, and the time period. You can also specific the matters you don’t want the attorney to have power over.

When to use this Ordinary Power of Attorney template

You can only grant the power of attorney to do things that you already have the right and capacity to do yourself. You can’t use it to allow the attorney to make decisions about your welfare.

Often, a general power of attorney (PoA) is used when

The attorney must be notified to make a revocation effective.