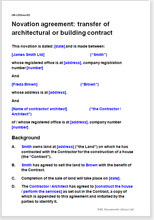 Easy to use, effective novation agreement, structured flexibly as a deed, for use where the customer of an architectural or construction contract changes part-way through the project (e.g. where the land and part-completed buildings are sold).
About
Preview
Why from us
Ask a question

About this novation agreement

Use this novation agreement to transfer a contract for the design or build of a property to the purchaser on the sale of land.

This is a simple yet comprehensive agreement that can be used to novate any building contract, usually with only minimal editing.

The consent of all three parties - the transferee, the transferor and the other contracting party - is required to implement the novation.

Why a deed of novation rather than a contract

Our novation agreement has been drawn as a deed rather than a contract. At law, a contract requires consideration (something in return for the novation). A deed does not require consideration, so it is a more flexible way of achieving the same end.

When to use this novation agreement

Typically (although not exclusively) this novation agreement would be used in the following situations:

This agreement could be bought by:

The deed of novation contains the following sections: