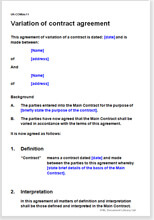 Change the terms of a legal contract using this variation agreement. Using this document, you can insert, delete and amend words, paragraphs and clauses or renumber existing paragraphs.
About
Preview
Why from us
Ask a question

About this contract variation agreement

This is an easy to use document that can be used to make changes to any contract. Using this agreement, you can add, delete or change words or entire sections.

We recommend using an agreement such as this one to change terms rather than agreeing the new terms verbally because having the agreement in writing provides a record of your agreed position should any dispute arise later.

When to use this contract variation agreement

This document can be used to change the terms of any contract provided:

Commonly, this agreement would be used where there has been an unforeseen change in circumstances (such as increases in the price of raw materials), or in the purpose or objective of the contract.

The document is relatively short and easy to use. It contains (among other standard paragraphs):